Presented in a format that immediately allows you to see what materials are needed, how much preparation is required and how each game is played, this book presents practical resource material in an accessible format.

Includes a special outdoor selection, and advice on how to make your group successful.

•  A creative guide to creative games in groupwork
•  Getting to know you (A selection of introduction and mixing exercises)
•  Gently as you go (Quiet games, mostly using gentle movement)
•  On the move (Exuberant games using vigorous movement)
•  Solve a problem (Games using puzzles and brain-teasers)
•  Talking it through (Verbal games)
•  Writing it down (Pen and paper games)
•  Use your knowledge (General and inpromptu quizzes)
•  Exercise your word power (A selection of stimulating word games)
•  Out and about (Outdoor activities)
•  Alphabetical list of games

Creative Games in Groupwork will be most enjoyed by people in the early to moderate stages of dementia.  People in the later stages of dementia will benefit from the interaction and conversation of the activity, providing the group size is kept small so that he or she does not become overstimulated and agitated as a result of too much going on around them. We Can Do I.T Too 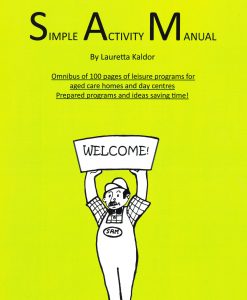 Therapeutic Groupwork for People with Cognitive Losses: Working with People with Dementia How to Make Your Care Home Fun