Professor Wendy Moyle discusses the role of robots in dementia care, particularly the use of companion robots, which her research suggests have the potential to improve mood and quality of life of people with dementia.

As a child I would run and hide behind the sofa whenever Dr Who came on television. Even though Dr Who fascinated me, the sound, look and movement of the Daleks frightened me. For this reason, I initially had concerns about introducing people with dementia to robots. What would they make of large, bulky robots speaking in a robotic voice? How would they view an animal robot? Would they believe it was a live animal? Was it unethical to be introducing lifelike animal robots that had the potential to further confuse reality?

My journey with robots

I was first introduced to companion robots in 2009, as a chief investigator of a European Union Grant researching assistive technologies and their use in helping older people maintain well-being. Through this initial contact I quickly realised that, despite the ongoing technological advancements, there was very little research on the effectiveness of these robots, particularly for people with dementia. The ever-increasing costs of such technology also encouraged me to explore their use as it seemed that while a few aged care facilities were purchasing robots, the high cost seemed to inhibit their use, resulting in them being stored in cupboards. Furthermore, I was interested to know whether robots were a cost-effective means of maintaining quality of life and reducing behavioural and psychological symptoms of dementia.

Along the way, I have faced many critics who thought I was creating an army of robot workers or trying to eliminate human interaction from aged care. While I understand these concerns, they are far from the truth (although sometimes the robots dotted around my office do look eerily like an army of Daleks!). What I am interested in is examining whether robots really do have a place in the care of people with dementia and ensuring that the best quality evidence informs their use. 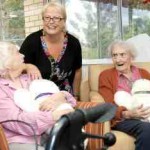 In the 1990s, ethical debates about the use of robots for supporting older people began to appear in the ethics and philosophy literature. The debates were (and still are) premised on the belief that robots are taking away the human element of care. This argument promotes the idea that robots are being developed and used to replace human interaction. I certainly never started exploring the use of robots in health and social care as a means to replace humans; in fact the research our team has been undertaking at the Griffith Health Institute, at Griffith University in Queensland, suggests quite the opposite. We advocate for the use of robots as conduits through which social interaction with another human being can take place. We see our robots as providing a talking point for staff and family. Robots, particularly companion robots, can also help to fill those inevitable times when people with dementia are left alone when care staff or family are occupied with another resident or task. This is not replacing the staff member or family, but rather providing comfort when they are absent. Robots might provide stimulation and comfort for a person with dementia who would otherwise have been alone, anxious and bored.

There is an ever-increasing supply of robots, including entertainment robots (that can sing and dance) and service robots (that can perform basic household chores). Our research work has focused on two other types of robots – telepresence robots and companion robots.

Giraff is a human-size telepresence robot developed in Sweden (www.giraff.org/). VGo is a more streamlined telepresence robot developed in the United States (www.vgocom.com/). Telepresence robots enable an operator to connect with a person or group anywhere in the world and to see each other as well as the surroundings. The advantage of these robots is the operator can remotely drive the robot from their computer, allowing visual access to the hospital or residential care setting (we like to think of it as Skype on wheels). Our team at Griffith University has just completed its first study of Giraff and hope the findings will be in press before the end of 2013.

Paro, designed as a baby harp seal, is a companion robot that shows emotion and respond to sounds

PARO is a companion robot, developed by Dr TakanoriShibata, a researcher at Japan’s National Institute of Advanced Industrial Science and Technology. PARO is a therapeutic robot with the appearance of a baby harp seal and weighs the same as a newborn baby. It has tactile sensors and moves its tail and flippers and opens its eyes when petted. Artificial intelligence software changes the robot’s behaviours based on an array of sensors that monitor sound, light, temperature and touch. It responds to sounds, can learn its name and learns to respond to words its owner uses frequently. It can show emotions such as surprise, happiness and anger and will cry if it is not receiving sufficient attention. It produces sounds similar to a real baby seal and is active during the day and asleep at night. PARO was designed as a baby harp seal because this is seen as a ‘neutral’ animal – most of us do not have prior negative experiences with a seal, as we may have with other animals such as a dog.

Australia, Denmark, Germany and the United Kingdom have been among the early adopters of robots in the care of older people and people with dementia. Denmark, for example, started using PARO in 2004 and according to Dr Shibata, there are more than 200 PARO now in use in that country. This helps to explain why the Danish Technological Institute demands and runs a program of certification for PARO users. Since 2008, Barbara Klein, a Professor of Social Work in Frankfurt, has been introducing PARO to students in the Bachelor of Social Work course to promote competence in working with older people in aged care services. Glenda Cook, a Professor of Gerontology in the United Kingdom, has undertaken ethnographic research with small groups of residents, observing their interaction with PARO. At Griffith Health Institute we have taken a more rigorous approach to exploring PARO. We examined the impact of PARO on quality of life, mood, anxiety and wandering in people living in residential care. In 2011 we recruited a group of 18 residents and randomly allocated them to either a PARO group (intervention) or a reading group (control). We standardised the way the PARO and the reading groups were facilitated and the amount of time the residents spent in each group. The residents attended three, 45-minute sessions each week for five weeks. After a three-week break, to allow any effects to wear off, they swapped groups and participated in another five weeks of sessions. This research found that participants in the PARO group had higher quality of life scores at the end of the five weeks than those in the reading group. They also had lower anxiety scores, with most participants expressing surprise when first seeing PARO.

Our work suggests that PARO has the potential to positively influence the lives of people with dementia, but further research is required to understand its effect. We need to know whether the benefits are seen when PARO is trialled with more people and the ideal length of time that people with dementia should spend with PARO. Given the high cost of purchasing ($AU5,000) and maintaining these robots, which currently have to be returned to Japan for maintenance, we also need to conduct a cost-benefit analysis. It is imperative that residential aged care facilities do not purchase robots without understanding how to use them, which residents are most likely to benefit and the best strategies for introducing and removing robots from residents.

Unfortunately PAROs do not have the capacity to engage in a complex or personal conversation and therefore they cannot replace the basic question-answer element of human conversation. PAROs do, however, offer positive feedback to human speech, with a positive response to verbal and tactile interaction such as an adoring look from the PARO’s beautiful large, black eyes and a comforting response such as a nuzzle. Although this may sound minimal, it seems to help to improve mood and quality of life for people with dementia.

Looking to the future

While my office might be overrun with robots, I’m certainly not alone. Look around your home, car and office and you’ll likely find at least a few robots that you interact with regularly. Robots are not so foreign after all, but it is imperative that healthcare professionals, people with dementia and their family are involved early in the development of robots so that such developments are user-centred and meet the intended needs. It is also vital that quality research is conducted to ensure a strong evidence-base for the use of these robots. My team at Griffith University certainly intends to continue on this path.

Professor Wendy Moyle is Director of the Centre for Health Practice Innovation at the Griffith Health Institute, Griffith University, Brisbane, Queensland. She is also a research leader in the Dementia Collaborative Research Centre: Consumers and Carers. Her research focuses on evidence-based practice to enable people living with dementia in long-term care an improved quality of life. Contact her at [email protected]

Professor Moyle’s work with robots was recently featured on the SBS2 program The Feed. It can be viewed at: http://bit.ly/HtEtL3